A double from Benzema after Cristiano Ronaldo's opener settled the encounter with Liverpool in an unforgettable first half.
Anfield

3
There are stages that make a victory all the greater. Anfield is one of them. There, in front of a crowd throwing its support behind a Liverpool side that had only lost one of its last 18 home matches in Europe, Real Madrid offered a demonstration of their exceptional form and came through a difficult test with flying colours to pick up an eighth consecutive win. They began the encounter organised and working as a unit to ease a first twenty minutes of stifling pressure both from the home side and their support. In that time, only a shot from Gerrard from the edge of the area had Madrid worried.

With this atmosphere resisted, Real Madrid's moment came, and in ten minutes they took their opponents apart in such a manner as to settle the encounter. It was Cristiano Ronaldo who struck first. His scoring instinct knows no limits. The exceptional understanding he has with James did the rest. On 23', the Portuguese fed the ball to the Colombian, who saw his team-mate's run and laid on an assist in behind the defence. Ronaldo finished with a subtle touch that was out of Mignolet's reach.

The second goal arrived seven minutes later. Kroos crossed to the far post and Benzema beat the hosts' keeper with a wonderful looping header. The Whites had increased their lead and were enjoying themselves on a stage of such adversity for opponents of Liverpool. So much so that on 41' they had beaten Mignolet for a third time. The Frenchman was once again to the fore as Kroos delivered the corner, Pepe fought for the ball in the area and Benzema took full advantage to tap in for his brace.

Third clean sheet on the trot
A historic first half for Real Madrid, for whom Casillas played his part with a prodigious save from Allen's shot two minutes later. The Whites went into the second half with the same intensity, taking control of the ball and, when they lost it, maintaining a level of pressure that suggested the scores were still even. Perhaps because of this commitment, the chances continued to fall for them. Cristiano Ronaldo had the clearest after 64', but Mignolet was equal to him when one on one. Ten minutes later, he left the field to an ovation.

“That's how Madrid win" could be heard in the Anfield stands. It was fully deserved. The Whites sealed their eighth consecutive victory, kept a clean sheet for the third match in a row, swept aside Liverpool with an unforgettable first half display and won at the stadium for the first time. All this three days before El Clásico. Real Madrid go into the encounter in unstoppable form - and the Bernabéu cannot wait for the clash to come around. 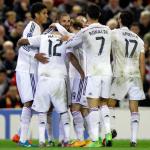