A Ronaldo hat-trick, braces for Bale and Chicharito and a James screamer sealed a win for a Real Madrid side that scored eight goals on the road for the first time in La Liga.
Riazor

8
The game against Basel was just a warning. Today there was definitive proof that Real Madrid are still growing, and the team are now starting to show the qualities that saw them crowned European and Copa del Rey champions last season. Pressing high up the pitch and recovering possession quickly, the away side was in blistering form in Riazor and, despite securing the win in the first half, the majority of the goals were scored late on. Bale could have opened Madrid's account in 16’, but Lux was able to block his shot.

The first half was vibrant, entertaining and played at a high tempo. Then the Whites killed off the game in less than seven minutes, with Cristiano Ronaldo and James getting on the scoresheet. Arbeloa sent a cross in from the right in the 29’ and the Portuguese, strong as ever in the air, rose higher than anyone to stir a header into the top corner from the penalty spot. The striker broke the deadlock and finally got a goal in one of the only First division grounds he had never scored in before.

The second goal was a masterpiece. James picked up the ball outside the box, lifted his head and, with everyone in Riazor expecting him to cross, he instead beat Lux with an unstoppable shot, that he whipped into the top right-hand corner. A spectacular strike from the Colombian for what was his first La Liga goal. Although their authority was now stamped on the game, the Whites did not want a repeat of what happened in Anoeta and as such continued to work hard and managed to get a third before the half-time break. After a pass between the lines in the 41’ found Benzema, the Frenchman was then taken down by the on rushing Lux 25 yards from goal, and, with the goalkeeper stranded, Cristiano Ronaldo was able to stick the ball into the empty net with his left foot.

Thirteen goals in the last two games
Soon after that Deportivo shortened the gap. Luisinho crossed in from the left and Cuenca's resulting header came off Ramos's arm, which the defender had pegged to his side. The controversial penalty was stuck away by Medunjanin in the 51'. With the score now reading 1-3, the home side started to believe they could come back into the game. Their optimism did not last long though. Marcelo picked out Bale on the left and the Welshman's cross-shot beat Lux before going in off the far post. As such, Real Madrid dashed any hopes of their being a fightback from the Galicians.

The Whites were well ahead at this stage, but, far from sitting on their lead, they just got better as the game went on. Isco, who came on for Modric, set up Bale and the Welshman got his second of the day with an deft finish in the 74’. The sixth came four minutes later. James robbed the ball on the edge of the box and passed to Cristiano Ronaldo, who sealed his hat-trick with a powerful left-footed finish.

In the 84’ Toché pulled one back with a header, but Chicharito opened his account with Real Madrid with a fantastic volley from outside the box in the 88’ and, four minutes later, the Mexican got past Lux again, this time from closer range. Real Madrid left Riazor after having recorded an historic result (never before had they scored eight goals away from home in La Liga) and now there is no doubt the team has reacted well to the poor start in La Liga. 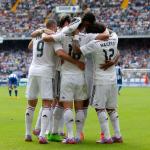