The central midfielder will join the Whites after winning the World Cup in Brazil with Germany.
Toni Kroos (Greifswald, Germany, 04-01-1990) is now a Real Madrid player. The 24-year-old central midfielder arrives at the Whites as a World Cup winner having enjoying an outstanding campaign in Brazil, where the German finished at the top of the FIFA rankings as the competition's most complete player. Kroos had an 85% pass accuracy percentage, and was the second highest cross provider (42) and covered the second most ground (82.6km).

Real Madrid are signing a winner. In addition to the World Cup, the player last season got his hands on the Bundesliga, the German Cup, the Club World Cup and the UEFA Supercup. The German contributed two goals and four assists in seven games in Brazil. His contribution in the historic 1-7 win over the host national Brazil also deserves a special mention, as he put on an exhibition in the centre of the pitch, scoring twice, laying on another and winning the man of the match award.

Toni Kroos is one of the top players around right now, young but with a lot of experience both at club and international level. He has played over 200 games for Bayern Munich and over 50 times for Germany. A leader who is capable of finding the best option in each situation, he has a vision of play to help teammates, an impressive shot and creates a lot of pressure from free kicks and corners. Also, his versatility means he can play in a number of positions.

Born on 4 January 1990 in Greifwald, he signed for Bayern Munich from Hansa Rostock, and in September of 2007 he made his Bundesliga debut. He was only 17 years and 265 days old, making him the youngest ever to play for Bayern at that point.

Chosen as best player at the U-17 World Cup
That summer Germany came third in the U-17 World Cup held in Korea. They did so, in the words of FIFA, "following an exceptional Toni Kroos's lead". In the third-place playoff, the new Whites player scored and registered an assist. He finished the tournament with five goals, which meant he was chosen as the best player at the World Cup.

The Whites' new central midfielder was loaned to Bayer Leverkusen for two seasons (2008/2010), where in the campaign before returning to Bayern he scored nine goals and set up 12 more. He has played 173 Bundesliga games, scoring 23 times. He has 51 caps for the German national side and has scored seven goals. He now joins Real Madrid and this, as Beckenbauer said, "is priceless". 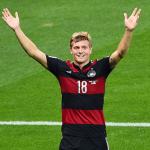