The first jersey, which is white, has a mandarin-style collar and hints of pink never before used, while the colour fuchsia is the standout feature of the ultra-modern second jersey.
Real Madrid and Adidas presented the new kits for the 2014/15 season, in gate 0 of the Santiago Bernabéu. There were grandiose scenes and a three-minute countdown as the eye-catching projection revealed some of the most spectacular football kits of all time. A video starring Xabi Alonso, who acted as the host, was followed later on by Di María, who drew an ending to the proceedings: “The next time we'll see these kits will be on the pitch”.

A star on the front panel
In a homage to the club's sporting achievements, the first jersey bore one star on the chest that shone like a light. Along with that could be seen the characteristic lines of the Santiago Bernabéu Stadium, a symbol of Real Madrid.

Crowning the elastic, a mandarin-style collar gives it a touch of timeless elegance that contrasts with the novelty of the never before used pink details. The crest will have a thermosealed high-density application with different textures, making it lighter and more comfortable to wear.

A colour never before seen in the history of the club
The second kit is even more of a break from tradition. The main colour is fuchsia, a concept never seen before in the club's 112-year history. The crest will create a unique and impressive visual impact as it is made entirely in pink and white.

As is usually the case with Adidas garments, the jersey incorporates Climacool technology, which helps regulate body temperature during play. 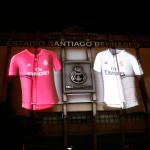