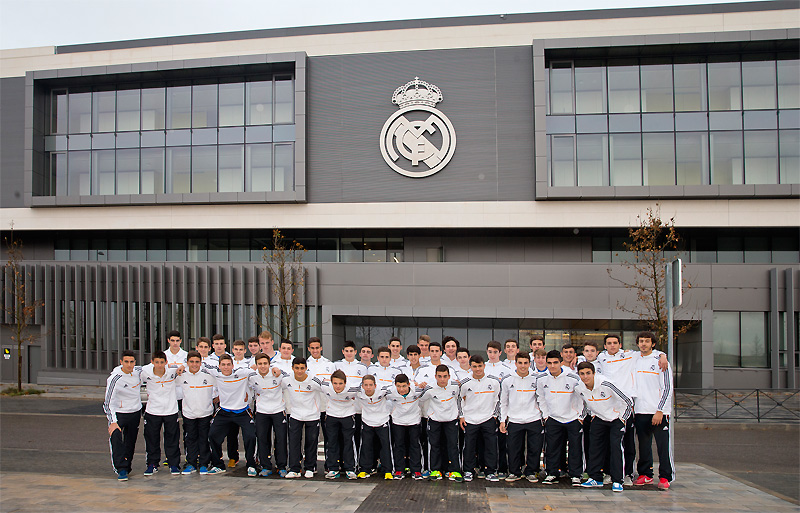 The academy are enjoying the new team accommodation

The academy’s accommodation has now been completed. After several months of work in pursuit of one of the club’s long-standing dreams, players from the Whites’ academy can now move into the accommodation next to the training pitches and enjoy a unique opportunity for their training and development to be the best it can possibly be. Florentino Pérez announced the project at the Assembly of Delegate Members last September and the dream is now a reality. The academy’s accommodation will be officially opened, alongside that of the first team, in the next few days.

On their return from the Christmas holidays, more than 50 of Real Madrid’s academy players moved into their new homes. All of them, players from outside of the Community of Madrid, met under the large club badge on front of the building. There are two entrances to the building, one at the front, and the other with direct access to the pitches where they will train every day.

There are a total of 40 twin rooms, which have doors that can only be opened with the fingerprint of the occupants. Inside they have individual bathrooms, a desk, TV and double wardrobes, as well as balconies overlooking the pitches. In the corridors there are photographs of the club’s legends that have made history with Real Madrid. Photos of Santiago Bernabéu, Di Stéfano, Raúl, and the moment when Zidane scored the winning goal for the club’s Ninth European Cup, are all on show. A photograph of Dani Carvajal laying the foundation stone at Real Madrid City is also part of the specially decorated corridors.

The dining room is an essential part of this accommodation. Balanced menus and diets are designed by Real Madrid’s Medical Services and adapted to the needs of the young athletes. It is also used as and when any of the teams need to use it.

Studies are a priority for Real Madrid. Players study at the SEK-El Castillo school. They have classes there in the morning and then take their remaining classes in the accommodation in the afternoon. The under-13/14s and under-15/16s take their turn first, followed by the under-19s after training.

There are two study rooms that have space to provide extra tutoring and there is also a library. The academy players also have to two rooms for when they have free time. There are televisions, video games, table football, pool and table tennis to keep them entertained.

The accommodation has impressed its new residents. "It is a luxury to be here. We have to take care of everything that we have been given and make the most of it on the field. The rooms and facilities are amazing. We are very excited. We are also very pleased with the study rooms because, as we will not have afternoon classes at SEK, we will be able to have individual classes here. We are pleased with the accommodation", said Guille Torres from the under-15s.

At midnight the lights will be turned out and the day will end at the academy’s accommodation at Real Madrid City.