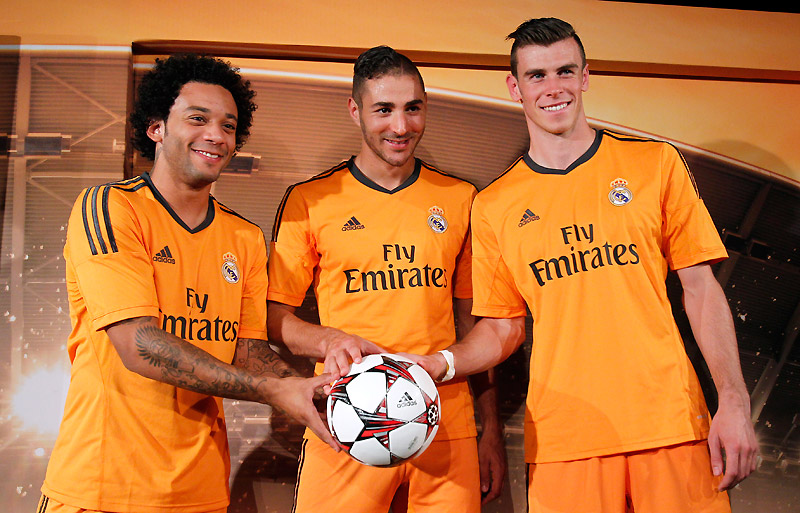 Real Madrid presented their third kit for the 2013/14 season

Real Madrid and Adidas unveiled the Whites’ third kit for the 2013/14 season on the roof-top terrace of Torre Europa in the Spanish capital. Bale, Benzema and Marcelo were the players that went to the event to show what will be the second kit that the team will wear in the Champions League. An orange shirt, which the club has never used before, and about which Benzema said: "I love it. It is different from the blue or white and it looks really good". "It is a very bright colour and hopefully it will give us energy and the strength to win the Champions League matches", said Marcelo, who also spoke about the next league match: "The match against Villarreal is tough but we are looking forward to getting a win". Bale, in his first official act as a Real Madrid player since his unveiling, said: "It is an honour to be at Real Madrid and I have been welcomed very well. Everyone wants to win trophies with this club and the team wants to win all the titles that are up for grabs".

Marcelo and Benzema were the first to speak and welcomed their new teammate, Gareth Bale. "We are very happy that he is with Real Madrid. He is an excellent player and I think he will bring a lot to the team. He is nice and friendly. He is an excellent player and I hope he’ll help us win a lot of matches", said the French forward, while Brazilian defender added: "He's normal, like us. He's a great player and I have the pleasure of being on the same team as him. I haven’t trained with him yet but I’m sure he’ll do well. To be at Real Madrid, you have to".

The Welshman thanked his new teammates for their kind words and spoke about how things have gone since his move to Real Madrid became official: "The truth is that as soon as I arrived I went off with Wales but it is an honour to be at Real Madrid and I have been welcomed very well. When I met Ronaldo, it was amazing. He is very nice. He welcomed me very warmly. I felt very welcome, I'm looking to getting out onto the field to play and help my teammates".

About his form and when he will make his debut with the team, he said: "I feel good. I did two tough training sessions last week and played for a while with Wales. I'm getting better. I'm behind my teammates on the fitness side but I hope to catch up quickly. I have spoken with Ancelotti but about things will stay between me and him. I'll play wherever he wants to play me on the field and give 100%. We’ll have to wait until Saturday's match to see if I'm in the squad or not, but I'm looking forward to it".

When asked whether the team's style of play fits with his footballing profile and about the pressure at Real Madrid, the Welshman said: "That is one of the big reasons that I wanted to come to Real Madrid. The playing style has a big influence. I will give everything to win when I go out to the field. I think it's an exciting time for the team. We all want to work hard to win every match and hopefully win all the titles on offer. When you're a Real Madrid player the pressure is on to win every match and competition and we work very hard every day to achieve that".

In reference to the chances of winning the Tenth, Bale said: "I learned how to say it. Everyone wants to win trophies with this club and the team wants to win all the titles that we are playing for". "Our group is very difficult. To win the Champions League we have to beat all of the teams and we will give everything to get through the first phase", said Benzema, while Marcelo was also very excited: "Every time we play in the Champions League we want to go all the way and win it. We know that is very difficult, every year we try and hopefully we will give the fans something to celebrate".

The team has had a great start in the league and about that Benzema said: "It is true that we play with fast breaks and we have to be wary of counterattacks. All teams play against us at 100% and we have to manage the match well". The Frenchman has been one of the key players in attack with his assists and goals and is very pleased with the way things are going: "I'm doing well, but the thing that should be stressed is that we are winning matches. That is the most important thing. I'm working hard and I hope to score lots of goals". Regarding the importance of Real Madrid fans’ support, he said: "Come to the stadium and support us. We need your strength".

In his speech, Marcelo said: "I am proud to be the third captain. It is a great responsibility and a great honour. We're going to keep working hard to try to win every match and every trophy. We will give everything to put Real Madrid at the top".

The Real Madrid defender also spoke about how his recovery from injury is going: "I'm getting better every day and hope to be back from the injury to help Real Madrid as soon as possible. At first we thought it was one thing but it turned out to be less serious and I hope to play again soon". Finally, he spoke about how the team is going into Saturday’s match at El Madrigal: "We are doing well. The match against Villarreal is tough but we are looking forward to getting the win".