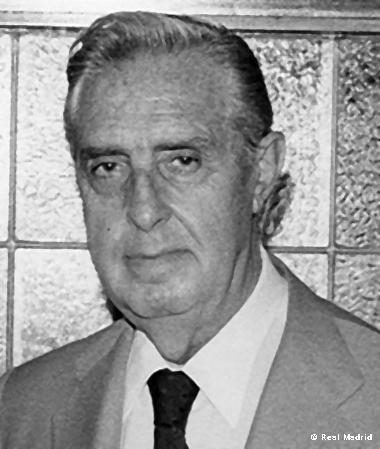 Luis de Carlos Ortiz succeeded his friend Santiago Bernabéu. During his presidency he was noted for his gentlemanly behaviour, his good manners and his generosity. His footballing achievements as president were also magnificent: five trophies and the title of the Best Team in Europe in 1980.

A member of Real Madrid from 1942 and a director from 1957, De Carlos assumed the presidency on 3 September 1978 and remained in the role for seven years. During his term as president, the club hired trainers such as Vujadin Boskov, Alfredo Di Stéfano and Amancio, who was to bring into the first team the famous generation of footballers known as the ‘Quinta del Buitre’ (The Vulture’s Cohort). When Amancio left the job, De Carlos entrusted the position of trainer to Luis Molowny, who would lead the team to the last title won by Luis de Carlos as president, the club’s first UEFA Cup.

Another historic occasion took place while he was president – the final of the Copa del Rey between Real Madrid’s first team and its reserve team, Castilla, a unique event which had never happened to any other club in the world. His spell as president also saw the renovation of the Santiago Bernabéu Stadium to host the World Cup in 1982. In memory of Luis de Carlos, during the first presidency of Florentino Pérez, Real Madrid set up the ‘Luis de Carlos Forum’.