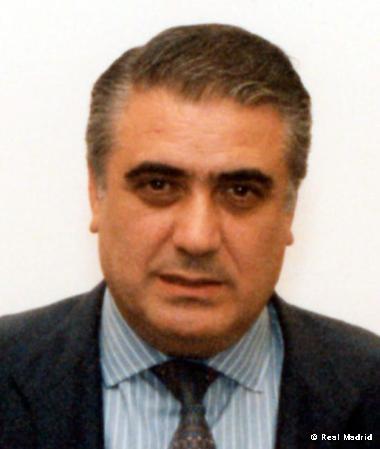 Real Madrid won six trophies during the presidency of Lorenzo Sanz and the football team emphatically dominated the period with players like Mijatovic, Suker, Seedorf and Roberto Carlos , and coaches such as Fabio Capello and Vicente del Bosque.

Undoubtedly the sweetest moment for Madrid fans was when they won their seventh European Cup. After waiting 32 years to lift the trophy again, in the 1997-1998 season a goal by the Montenegrin player Pedja Mijatovic against Juventus gave the club and their fans a victory they had longed for.

With Sanz at the helm, the basketball team also won the Spanish Basketball League in 1999-2000. They even secured the title against their eternal rivals Barcelona in their home stadium in the fifth and final game of the play-offs.

Lorenzo Sanz first became a director of the club in 1985 during the presidency of Ramón Mendoza, first as a member of the board of directors and then as Vice-President. In 1995, Mendoza resigned and the Madrid born Sanz became president. His family was also closely linked to the club and two of his sons actually played at the highest level for Real Madrid, Fernando in the football team and Lorenzo in the basketball team. He passed away on the 21st March 2020.