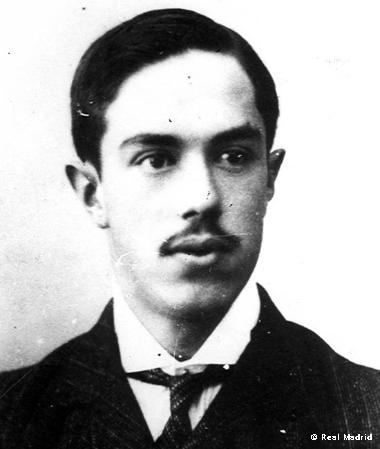 Julián Palacios was the founder and first president of Real Madrid and it was his passion for football that led him to set up the club. The Madrid born Palacios first became interested in the sport at the age of 20 when he was studying Mining Engineering at university and would regularly meet up with a group of English friends. The main topic of conversation at these gatherings was always football (since the sport had already been established in England some years before). Football meant a way of forgetting about the pessimism that had engulfed Spain due to the loss of its last colonies at the end of the 19th century.

His father-in-law, who was a well-known businessman of the time, gave him permission to use some land that would become the club’s first playing field where players wearing trousers rolled up around their knees and t-shirts sowed the first seeds of a new game and caught the eye of passers-by.

Palacios effectively founded Madrid F.C. in 1900, although not as an official entity since the players just wanted to play football for fun and were not worried about the legal questions involved in a sport that was still in its infancy in Spain. As well as being the first president of the club, Julián Palacios was also the team’s first captain and the first centre forward.

He left the presidency of the club in 1902 and handed over responsibilities to Juan Padrós who was the man who officially established the club.