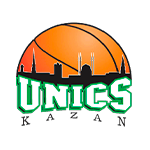 An off day in attack prevents the Whites from taking the spoils on the Unics court.

The demanding double-header in Russia came to end an with one win, against Zenit on Wednesday, and one defeat, on the Unics Kazan court, in what proved to be an off day for Pablo Laso’s side. But Real Madrid came close and was denied in the final stretch when the hosts were more clinical in the final two minutes.  Tavares, with 15 points and a PIR of 28, was the team’s stand-out player, with Juan Núñez impressing on his EuroLeague debut for Madrid.

The match began in a very physical tone with Unics Kazan playing aggressively. Madrid struggled to adapt to the approach, which resulted in an unproductive first quarter (14-11). The visitors improved in defence and in attack, although they lacked energy and made more mistakes than usual, with Tavares (five points and four rebounds) spearheading the team against an inspired Hezonja (7). The first big scoring run saw Perasovic’s side, in the midst of a sublime start to the second quarter, produce a 9-0 run to take a 10-point lead with the score at 21-11 in the 12th minute.

Madrid improves with Núñez
Laso decided to turn to the academy side player and the Poirier-Tavares partnership, and it was the 17-year-old, on his EuroLeague debut, who changed the side’s fortunes. Núñez’s energy, exuberance and, above all, quality, gave the team a boost of dynamism that was felt at both ends of the court. He recorded two points, three assists and two steals in just three minutes which resulted in the best minutes of the game for Madrid. A 1-8 run brought the score to 22-19 on the 14' mark, but just when it looked like the visitors might be able to catch the hosts, the Russians managed to stay ahead. Madrid's late surge in the last minute of the first half, culminated in a three-pointer by Llull, meant the Whites went into halftime with only a one-point deficit (35-34).

What Real Madrid had not been able to accomplish in the first half, it did at the start of the third quarter. Laso had reserved the services of Causeur (even Rudy, suffering from back problems, had not had much of an impact on the game). By staying solid at the back, the team found its rhythm and continuity in attack.Madrid began to inflict damage on the counterattack and move the ball with ease. Abalde, Yabusele and Tavares led a first 10-0 run that extended to 14-5 in the 27th minute for the biggest lead in the team's favour (40-48). The Russian's responded from the three-point line, producing three in a row, two by Vorontsevich, before entering the final stretch (49-51, min. 30).

It was all decided in the final minute
The pattern of the game then reverted to that of the first half, with both teams’ shooting averages dropping and the defences taking centre stage. Rudy had now entered the fray, but Madrid was having an off day in attack. Unics Kazan was not at its most clinical either. Abalde took his team 57-58 with a three-pointer with three minutes to go. However, in that time, the team made several losses, its major shortcoming in the game, and Madrid’s opponent took advantage to pull seven points clear and seal the victory. In 48 hours’ time, the Whites face a third away game, which will be played in Vitoria (Sunday, 6:30 pm, CET).