On the 24th of June 2015, Real Madrid lifted the title against Barcelona in the third game of the final (85-90).
Today marks six years since Real Madrid basketball team's 32nd League title. Laso's team were crowned champions, beating Barcelona in the final. The madridistas only needed three of the best-of-five series, winning the first two at home and their first away trip (78-72, 100-80 and 85-90).

In the Regular Season, Real Madrid were the best team with a record of 27 wins and 7 defeats. Their play-off rivals were Herbalife Gran Canaria (quarters) and Valencia Basket (semi-finals) before they booked a place in the showpiece against Barcelona. The key men in the campaign were Reyes, voted season MVP, and Llull, MVP in the final. Real Madrid enjoyed their best ever campaign that year, lifting the European Cup, the league title, the Copa del Rey and the Super Cup. The 2015 Intercontinental Cup completed a five-title haul. 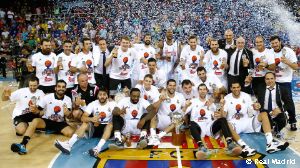