The Menorcan reached this milestone in the first match of the final against Barça.
Real Madrid's Sergio Llull made his 500th league appearance for the club in the opening match of the final against Barça. The madridista reached this milestone in his fifteenth season with the club, having won six ACB League titles. He has also been named MVP in the competition on one occasion, MVP in the finals two other times and member of the best five three times. After teammate Felipe Reyes, he is the second Madrid player to have played more than 500 games.

Llull joined the team at the age of 19 during the 2006/07 season, and has made a name for himself among the best players in Real Madrid's history, leading the team through one of its most successful eras. The Menorcan is a shining example of Real Madrid's values, both on and off the court. Llull demonstrates character, fighting spirit, dedication and commitment to never give up. He is now one of the team captains and a legend passing the 800 game mark for the Whites, with 862 total appearances. 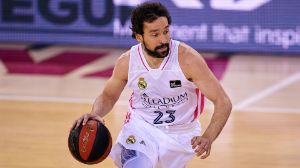