The academy team face a single-leg tie and will be looking to qualify for the final round of the competition (12pm CEST, Realmadrid TV).
Real Madrid Castilla face a crucial first single-leg tie in the playoffs for a place in the Segunda División. The Nuevo Vivero stadium in Badajoz will be the venue for the clash between Ibiza and the Madrid academy side (12pm CEST, Realmadrid TV), as the Whites will go all out to secure a spot in the next round of the competition.

Castilla have had a spectacular campaign and they will be hoping they can take it one step further by reaching the playoff final. But first, Raúl’s side will have to be at their best to overcome Ibiza, who have won four of their last five outings. If the game were to end in a draw, there would be an extra-time period of two 15-minute halves. If there is still no winner after extra-time, the team who finished higher up in the previous standings will go through – which would be Ibiza.

If Castilla are to progress past the Balearic Island side, they will have to reproduce their slick attacking play, which has seen them score 40 goals this season, in comparison with the 36 netted by Ibiza. Madrid’s fine goal-scoring tally is partly down to Hugo Duro who has struck 12 times and has been named in the squad for today’s clash.

UD Ibiza
Ibiza are one the of most in-form sides this season in the Segunda División B after finishing both initial parts of the league on 52 points, with a record of 16 wins, 4 draws and 4 defeats. This impressive form is largely down to the team’s solid defence as Juan Carlos Carcedo’s side had the best defensive record in the subgroup, conceding just ten goals. 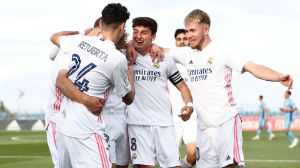