0
Real Madrid knew they were heading into a final against Borussia Mönchengladbach and Zidane's side once again demonstrated an unerring ability to step up when it matters most. The Whites all but won the game in a little over half an hour thanks to two Karim Benzema headers, making the Frenchman the all-time leading appearance maker at the club as he scored in his 200th individual game to put the Whites into the knock-out round as group winners.

Zidane's men dominated the clash from beginning to end but it took them just nine minutes to open the scoring. Lucas Vázquez crossed and Benzema was on hand to nod a superb header past a helpless Sommer. The German side reacted swiftly, first through a powerful Thuram drive just a minute later that ended up in Courtois' gloves, before Pléa failed to beat the madridista shot-stopper in a one-on-one on 25’.

From that point on until the break, it was all about the hosts, who added to their lead with just over half an hour gone with a move that was almost a carbon copy of the opener. This time it was Rodrygo who provided the delivery and Benzema again rose highest in the box to send the ball into the back of the net with his head. Far from sitting on their advantage, Real Madrid continued to push forward and could have gone further in front on 39’. Lucas Vázquez's pass came from the right flank, which was causing the German side all manner of problems, and Modrić's first-time strike from inside the box forced Sommer into a wonderful stop to turn the ball on to the post. The Croatian did find the target four minutes later but his effort was ruled out with Varane adjudged to have been offside in the build-up.

The second half began with another chance for the hosts, who knew what they had to do to hurt the opposition. On 48' Rodrygo got away from Lázaro down the right and his cross found the head of Benzema, but Sommer dived well to deny the Frenchman a hat-trick. The Swiss keeper then pulled off a spectacular save on 62’ when Kroos shot left-footed from the edge of the area and seven minutes later Sommer sensationally stopped a Ramos header after he had been picked out well by the German. Benzema latched onto the rebound and smashed the ball against the underside of the crossbar.

Lucas Vázquez hits the post
Sommer was all that was preventing Real Madrid from running riot in the scoreline, as the Whites continued to dominate with the complete performance Zidane had called for in the pre-match press conference. The Frenchman brought on Sergio Arribas for his debut in the competition and Asensio in place of Rodrygo and Vinicius Jr. The hosts kept pushing forward and Lucas Vázquez powerfully fired the ball against the post from inside the area with 78 on the clock. It was a well-deserved victory for Real Madrid, who finish top of the group. Next up in the last-sixteen it will be one of Porto, Atalanta, Lazio or Leipzig. 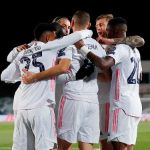