The Brazilian reached the landmark in Real Madrid's win over Huesca.
Marcelo clocked up his 250th LaLiga win with Real Madrid in the 4-1 triumph over Huesca at the Alfredo Di Stéfano. The Brazilian, who made his competitive debut in the away trip to Deportivo La Coruña on 7 January 2007, boasts an impressive trophy haul: four European Cups and Club World Cups apiece, a trio of UEFA Super Cups, five LaLiga titles, two Copas del Rey and four Spanish Super Cups.

The madridista vice-captain has made 361 appearances in LaLiga and has netted 26 times in the domestic competition. His best campaigns in terms of victories were the 2009-10 and 2014-2015 seasons, in which he amassed 28 wins. Athletic are the team he has come up against on the most occasions (21), whilst  Espanyol are the opponents against whom he has recorded the most wins (17). 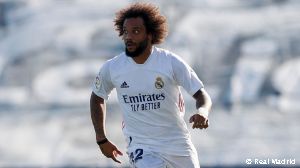