The squad underwent their first medicals at Sanitas.
Real Madrid Women's 2020/21 campaign is now up and running. The players came together at the Ana de Austria building at the Hospital Universitario Sanitas La Moraleja to undergo the medicals which mark the beginning of the pre-season campaign. From this campaign onwards, the club's official provider, Sanitas, will take care of the health of the club's female players, who will benefit from medical advances and cutting-edge facilities currently available to their male counterparts and the players from the basketball team. 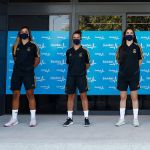