Ramos and Modric recall the goal in Lisbon that sent Real Madrid into extra-time on their way to lifting La Décima, with goals by Bale, Marcelo and Cristiano.
Lisbon, 24th of May 2014. The 93rd minute of the Champions League final between Real Madrid and Atlético. At 0-1 to the rojiblancos, Modric whips in a corner and Sergio Ramos rises to head home a spectacular header to level the game. From then on, an extra-time exhibition with goals for Bale, Marcelo and Cristiano Ronaldo to round off a 4-1 victory which would start a legendary spell of four Champions League trophies in five years. On the sixth anniversary of La Décima, the two protagonists of that unforgettable goal look back on the magic moment that will live long in the memories of all of madridismo. This is how Ramos remembers that night: “In a single word, I'd say it was historic. Historic and magical because Madrid is a magical world and we're fortunate to be part of it”.

“The first thing that comes to mind when I think about Lisbon is the trophy, the Champions League, after so many years fighting, to be able to first enjoy that final and then go on to win it. You think of all your family and the sacrifices and effort you put in over so many years. That's the beauty of football, the reward of lifting the Champions League trophy and adding it to your CV”.

Club identity
“I think about the Real Madrid DNA, fighting to the end. So long as there is the slightest chance, whether it's a minute or a second left, I've always believed it's possible".

“It's true it was a fantastic header, the execution, the jump, the distance, Thibaut in goal, who is huge in the sticks. I think that was the only place the ball could've gone in. It was a great ball by Modric, I head for the back stick because that where the most players were and I could get blocks in easily. Godín is marking me, there was Bale, Cristiano... I make a run for the back post and dart inside. In those tenths of a second with so many players and so much movement, Godín didn't have time to react because I'd got in front of him. That metre allowed me to move forward on my own, to the penalty spot and get pretty much a free header, perfectly executed in the 93rd minute to level the game and take us to extra-time”.

Modric: “I was convinced we were going to score”
“I was very calm, with the belief we were going to get the goal. Sergio was in a good area, he positioned himself well and then, how he rose to turn it in, it's historic. It was incredible”.

“We'd practised that corner a lot during the season. We'd done it previously in Champions League games, like against Bayern and some LaLiga clashes. It was important to put a good ball in the area I did, but then Sergio made a great run and a perfect finish”. 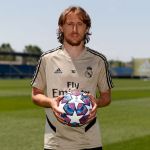