The youth team lost to Barça by two points (65-67).
Real Madrid's Infantil A fell in the Minicopa Endesa final  65-67 to Barça. The Whites' youth team had dominated the competition in recent years, tasting glory in each of the last seven editions, but were unable to retain the title after a hard-fought clash.

The madridista side had possession with 15 seconds to go, to tie or win the game but just missed out. Hugo González, who made the Minicopa best five, finished as the top scorer for Madrid, with 18 points and 14 rebounds. Ismaila took 19 rebounds.

Semi-final
Infantil A v Valencia-Basket (84-58)
Infantil A downed Valencia Basket in the 2020 Minicopa Endesa semi-final and will now face Barça. The Whites totally dominated a contest that they tipped in their favour between the second and third stanzas with a run of 44-22. Hugo González was Real Madrid's star performer, with 14 points, 8 rebounds and a PIR of 24. There were also impressive showings from Ismaila (12 points and 11 rebounds) and Asier (11 and 8).

Group stage
Infantil A v Coosur Real Betis (62-46)
The Infantil team got its tournament campaign off to good start by overcoming Coosur Real Betis by 16 points. There were standout performances from Hugo González (16 points and 15 rebounds) and Ismaila Diagne (9 points, 19 rebounds and a PIR of 23).

Cenor Obradoiro CAB v Infantil A (57-85)
The Infantil A side recorded a second Minicopa triumph after beating Cenor Obradoiro CAB. The Whites tipped the match in their favour in the first stanza with a run of 16-31 and rounded off the win after the interval. Zustovich (15 points, 9 assists and a PIR of 30), Ismaila (17 rebounds and a PIR of 28) and Hugo González (16 points and 9 rebounds) were the madridistas' leading lights.

Unicaja Andalucía v Infantil A (65-83)
The madridistasclosed out the group stage of the Minicopa with a clean sweep of wins after seeing off Unicaja Andalucía (65-83) to progress to the semis as the winners of Group A. The Infantil A stormed the first half and went in at the break with a +30 lead. The Whites kept the scoring rate up during the second half to claim a 65-83 triumph. There were eye-catching performances from Hugo (31 points and a PIR of 37) and Zustovich (23 and 36). 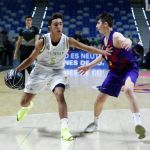