Zidane’s team will carry out the first part of pre-season in the Canadian city.
Real Madrid have now arrived in Montreal. Following a seven-hour flight, the Whites' travelling party touched down in the Canadian city at 9:30pm CET (3:30pm local time). The squad then travelled on to the Ritz Carlton hotel, which will be the team's base throughout their stay in Canada.

Zidane oversees a 29-man squad that e will carry out the first part of their preparations in Montreal, a city the side was based in back in 2016. They will then travel to the United States to take part in the International Champions Cup, where they will face Bayern Munich, Arsenal and Atlético Madrid. 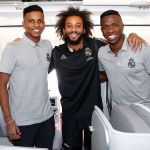