"I'm delighted for Modric. It's as if I've won it myself, we can even share it back at the club. I'm really pleased, he's an excellent player and has made his mark on an extremely important era for us at Real Madrid".

Madridista dominance
"It's been a magical night, in which Madrid once again reigns supreme and it's a clear sign that we're doing a really good job. We dedicate all of these awards to our fans".

"The key is to ignore the criticism and to not get carried away when you receive praise. It's all about just doing my job, being happy and enjoying every moment. Nearly everyone enjoys the way I play, so I've only got reason to be happy".

His debut
"When I made my debut I knew that it was the start of a tale, but I didn't know quite how it was going to pan out. I now know that it's turned out to be a very good story and I'm very proud to have made my Real Madrid debut at the age of 18".

"It's a whole life of hard work and many years of sacrifices. This award is the reward for a good attitude and the effort put in throughout my whole life. Today I'm here picking up this accolade and I'm really happy".

World Cup winner and inclusion in World Cup XI
"They're two fantastic accolades and there are no words to describe what it feels like to have a summer like that. I've won the two greatest trophies a footballer can win. I just want to enjoy this because it's fantastic. I thank the France and Real Madrid fans, who always back us. I couldn't have imagine that this would happen to me".

Modric named The Best
"He's a different sort of player. His ball control and elegance is very special to see. He's a friend and I'm really pleased he's received the award because he deserves it. He's a great player and a super guy". 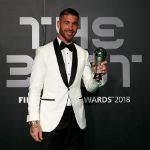