Another detail to highlight is the goalkeepers’ shirt. On both the first and second kits you can see for the first time a set of horizontal stripes that make them completely different. They are light and comfortable, like those of the out-field players. In addition, Adidas have this season created a line exclusively for the coaching staff, with a V-neck.

Second kit
The second shirt maintains a dark tone, like last season. Adidas have chosen the onix tech, a metallic colour that highlights the shoulder bands, which will have a softer tone, and the white of the logo and the sponsor. The neck, unlike the first kit, has no buttons and is V-neck. 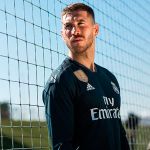