Florentino Pérez took the floor first: "There has been a love story between the European Cup and Real Madrid since Santiago Bernabéu and the prestigious French newspaper L'Equipe, backed by UEFA, founded and created the European Cup in 1955, giving football a new dimension previously unknown. That, without a doubt, was the origin of the universality of Real Madrid and was also the beginning of a legend unrepeatable until now.

The objective of winning the Champions League
"Hard work, the insatiable pursuit of excellence, talent and an determined winning spirit have meant that year after year we have the challenge of winning the trophy with the sole purpose of satisfying the dreams of millions of fans spread around the world".

New era of success
"We are aware of what it means and we value what these players and our coach have done for Real Madrid. From unity, from unbreakable faith in hard work and from humility they have made history again. Because the madridistas know that we are experiencing a new golden era in our 115 years of history”.

"My thanks to the publisher who made it possible, Espasa. For us, it is an honour to be joined today by the President of Grupo Planeta and Atresmedia, José Creuheras. Thank you very much, José, because for us this is an endearing act and your presence makes it even more endearing. Thanks also to Ana Rosa Semprún, general director of the editorial".

Enrique Ortego: "This book is more than la Duodécima"
"One day I sat down with Florentino and I suggested that this book was much more, it was la Duodécima, plus the league, the European Super Cup and the Spanish Super Cup. In the 115 years of history, Madrid already knows what it is to have teams that define an era. What can we speak about the team of the 5 European Cups, or the Yeyés, impossible to forget the Quinta del Buitre or the Galacticos. A team of eras, which could have been the title of the book, with the common denominator, successes".

Exposition
In addition to the presentation of the book, the presidential box hosted an exhibition of the Historical Heritage Center of Real Madrid in which they could view the other 11 European Cups and the t-shirts and objects commemorating those finals. 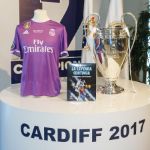