Óscar scored a great goal for the madridistas, who were unable to overcome Manchester City in a game that saw Ceballos and Vallejo make their debuts.
Los Angeles Memorial Coliseum (Los Angeles)

4
1
Real Madrid failed to win in their second International Champions Cup game. The European champions, who continue their preparations for the official season starting in August, went down against Manchester City. After an even first half which finished all square, the English side were sharper in the second period. Despite chances falling in both areas, Zidane's men couldn’t get the goal. Real Madrid were again supported by thousands of fans for what was the finale of their stay in California.

Both sides came out to a spectacular setting with the Olympic torch lighting up the Memorial Coliseum in Los Angeles. On the pitch, Zidane repeated the formula from the first match, with two changes in the starting eleven, Kovacic and Casemiro came in. In the stands, a large number of madridistas made their team feel at home despite the distance. And they were close to celebrating the first goal. Bale fired high after a good individual move and Isco tested Ederson with a swerving effort.

Real Madrid it was who had made the brighter start, however, Gabriel Jesús was proving a dominant force in the City attack. Indeed, even time he got on the ball he was a threat. Next up it was Keylor Navas' turn to prove his mettle as the Madrid custodian pulled off two fine saves in quick succession. First up, he palmed away the Brazilian's effort before denying Agüero from point-blank range. It was turning out to be an encounter in which the ascendancy was changing hands and after a few scares, it was Madrid's turn to get back on top. On 28' Casemiro's headed effort came back off the woodwork, with Ederson thwarting Benzema on the follow-up. This double chance represented Madrid's clearest opening before the break, but the sides ultimately went in all square.

Kiko Casilla was the only new face in the Whites' line-up after the restart. The two sides came out intent on getting on the front foot and City it was who made the breakthrough when Otamendi pounced after Casilla had kept Stones' effort out in the 52nd minute. Madrid sought to claw themselves back into the game and they had two quick-fire chances to have restored parity, with Casemiro and Modric both failing to find the net with their efforts. Meanwhile, the Premier League outfit were posing a real threat with their quick counter-attacking play. Sterling put City further ahead when he latched on to De Bruyne's threaded pass to double their advantage on 59'.

Ceballos and Vallejo make their debuts
With half an hour remaining, Zidane shuffled his pack and changed all 10 outfield players. These substitutions saw Ceballos and Vallejo both make their Real Madrid bows. Meanwhile, City continued to pour forward and they added to their lead when Stones turned the ball home on 67' after De Bruyne's free-kick had come back off the upright. Despite the result, Zidane's team continued in search of a goal. Borja Mayoral almost scored and Vallejo also had the chance for a debut goal. However, lady luck did not smile on the Whites, who conceded the fourth after Brahim Diaz finished from distance. With time almost over, Óscar scored for Madrid with a beautiful strike from outside the area. The first phase of the tour is over and the Whites will now head to Miami for one of the summer's hottest events: Sunday’s Clásico at Hard Rock Stadium (2am CEST). 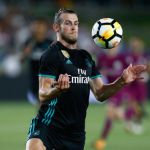