Tributes were paid to the Real Madrid president at the meeting and he was presented with a commemorative plaque.
Real Madrid supporters clubs from the Community of Madrid have celebrated their 20th anniversary in a meeting of more than 150 people, which took place at the Asador Donostiarra. The event was attended by Real Madrid president, Florentino Pérez, who was praised and honoured with a commemorative plaque, while second vice-president, Eduardo Fernández de Blas was also present. After the dinner, the Whites' chief thanked the members of the fan clubs for their unconditional support. 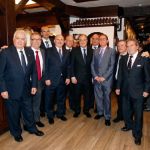