“We know that we are much stronger when we are united. The most important things that Real Madrid have got are the members and the fans”, said the president.
The Madridista Ibáñez supporters group celebrated it's 50th anniversary at an event attended by Florentino Pérez. The Whites' supporters group paid homage to the Real Madrid president at the even that was also attended by Nicolás Martín-Sanz, spokesperson for the Board of Dirctors, the ex-players Clifford Luyk and Antonio Ruiz as well as the director of supporters groups, Manuel Gómez.

The Real Madrid president highlighted the role the supporters groups play “in the structure of madridismo. The most important things that Real Madrid have got are the members and the fans, we know that we are much stronger when we are united, our obligation is to continue to add to the Real Madrid legend”.

Florentino Pérez received a insignia and a commemorative plaque from Luis Cáceres, the president of the Ibáñez Suppotors group, who at the same time received a plaque for the 50th anniversary from the Real Madrid president. 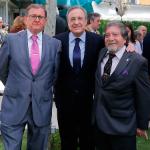