Braces from Cristiano Ronaldo and Benzema as well a goal from Bale seal the win in a first half to be remembered.
Santiago Bernabéu

1
Zidane's Real Madrid are full of confidence. The team needed just slightly more than ten minutes to undo Sporting in the first game of the second half of the season, as the scored three beautiful goals and ensured their sixth consecutive win at the Santiago Bernabéu. All of the goals came from the BBC and the first came after 7 minutes following a now lethal connection from a dead ball situation. Kroos took the corner and Bale, at the near post, headed the ball into the net. This is the third consecutive game where this strategic move has paid dividends for the Whites.

The second goal came two minutes later. Bale recovered the ball in midfield, Carvajal delivered to Benzema and the Frenchman provided an assist to Cristiano Ronaldo. The Portuguese forward's manoeuvre to turn and improvise a shot with his left foot was perfect. Real Madrid were in storming form and the third goal was a just reward for the side's brilliant play. The cross came from Bale and Bezema hit a spectacular half bicycle kick that got the fans out of their seats.

The team were enjoying themselves out on the pitch and ensuring the fans had a great time, but they were not satisfied with what they had and before the end of the first 20 minutes they scored the fourth. The goal came with a measured cross from Carvajal from the right wing and Cristiano Ronaldo got the goal with a left-footed first touch finish. This sealed the Portuguese player's brace.

Masterclass from the home side
It was difficult to ask anything else from the Whites, as they carried on with their masterclass and went in at the break with another goal. The move was one to be remembered. Isco controlled the ball on the edge of the box, he got away from the opponents with a lovely flick in the 41st minute and surprised everyone with an assist over the defence. The Frenchman did the rest to seal his brace: he brought the ball down and shot. The only negative note to emerge from the first half was added by Bale, who came off with discomfort in the 45th minute. Jesé substituted him after the break.

Benzema came off with injury niggle
The home side continued to dominate the ball in the second half, however Sporting reduced the deficit in the 62nd minute through Isma López. Bad luck fell on the Whites three minutes later. While Bale came off with an injury niggle minutes before the break, it was now the turn of Benzema who had to be substituted by Kovavic following an accidental knock with James. It is the Whites' sixth consecutive win at the Santiago Bernabéu and they are showing unbeatable form at the start of the second half of the league season. 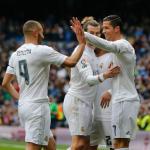