Four goals from the Portuguese ace, a hat-trick for the Frenchman and one from Kovacic saw the Whites finish the group stage with a flourish.
Santiago Bernabéu

0
Real Madrid offered up a further demonstration of the good form they're in on Tuesday night, as they completed a historic thrashing of Malmö to end the Champions League group stage unbeaten and with a clean sweep of home wins in the tournament's round-robin phase for the third straight season, and in the process rack up their fifth consecutive victory in all competitions. On top of that, Cristiano Ronaldo grabbed yet another record, becoming the highest scorer of all time in a single group phase in Europe's elite club competition (11).

As against Getafe on Saturday, Madrid came flying out of the traps and had the game all but won in a first-half display that saw Karim Benzema shine once more. It took Rafa Benítez's men just 12 minutes to get themselves in front, Cristiano receiving the ball on the left flank and crossing for Isco, whose effort was saved by Johan Wiland only for Benzema to fire in the rebound from close range.

Second straight double inside under half an hour
The intensity shown by the hosts remained sky high, and nine minutes later they extended their lead. Cristiano again delivered the cross, and - this time with a marvellous header - Benzema netted, making it the second game in a row that the Frenchman, who is now the tenth highest marksman in the history of the European Cup (46), has got two on the board inside the first half hour.

Little more could be asked of the Whites, who offered no let-up in their hunt for further goals. Another arrived in the 39th minute courtesy of an excellent Cristiano free-kick from the left, having come close two minutes earlier as Casemiro stroked a lovely pass to leave Cristiano one on one with Wiland, only for the keeper to deny the Portuguese ace. From the resulting loose ball, the Brazilian's header was cleared by Yoshimar Yotún on the goal line.

Ronaldo makes history
The second half could not have got off to a better start for Real Madrid. If Benzema was the star of the show in the first 45, in the second it was Cristiano. In just five minutes, the Madrid faithful were treated to two more goals from the forward, either side of a prodigious diving save by Kiko Casilla from Vladimir Rodiç's powerful drive. They came in the 47th and 50th minutes, both beginning with Danilo on the right flank and finishing with the Portugal star firing in from near the penalty spot.

And there was more to come from Cristiano, as he notched up his fourth of the night eight minutes later following a fine move. It was started by Benzema, who - boxed in by two opponents on the touchline - conjured up a backheel to release Isco. His ball into the box was snapped up by Ronaldo, who comes away from the game as the top scorer in history in a Champions League group stage, with 11.

Kovacic opens his account for Madrid
If the first half had served up a good performance, the second was outstanding, and with 20 minutes to go Mateo Kovacic joined the party. Jesé Rodríguez controlled on the right, slipped his marker and crossed. Wiland got a foot to it, but cleared only as far as the Croat, who took full advantage to score. And there was still time for Benzema to round off his hat-trick in the 74th minute, concluding a historic win: together with Liverpool's victory over Besiktas in 2007, also under Benítez, it is the biggest ever in the Champions League. With Real Madrid revelling out on the pitch, it was an evening for the Bernabéu crowd to delight in their team's display. 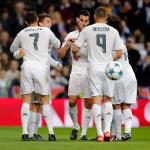