The former Real Madrid player, who was at the club between 1954 and 1960, died on Saturday 22 August.
The Santiago Bernabéu observed a minute's silence and the players wore black armbands ahead of the Real Betis match as a mark of respect for Ángel Atienza II, who died on Saturday 22 August. Atienza II joined Real Madrid in 1954 and remained at the club until 1960. As a defender he made 99 appearances and won four European Cups, featuring as a starter in the finals that brought Madrid's first and third continental crowns. On top of that, he claimed three La Liga titles and two Latin Cups during his time as a Whites' player. 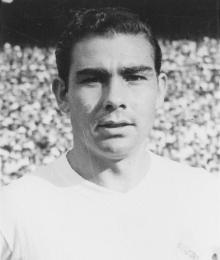