Cristiano Ronaldo scored the goal for the Whites, who deserved more against Juventus.
Santiago Bernabéu

1
Real Madrid gave it their all right to the end, but proved unable to turn around the tie against Juventus. The hosts came out in dominant mood from the first whistle and, in just 20 minutes, they had already created five clear chances to score, the best falling to Bale, with a header on 1', to Benzema, who fired over inside the area after a subtle touch to lose Bonucci after 5', and once more to the Welshman, whose powerful effort forced Buffon into a fine save on 20'.

The home side's exertions to hound their opponents were clear for all to see. Madrid were pressing high up, and winning the ball back in good positions or forcing Juventus to take risks. Such levels of effort delivered their reward. James was brought down in the box by Chiellini on 23', and Cristiano Ronaldo converted the penalty to put the European champions ahead.

For a few moments, the match entered into a period of calm, until a new wave of Real Madrid attacks arrived in the final five minutes of the first half. Cristiano Ronaldo and Benzema were close to scoring from two stunning counters on 41', but the former's volley hit the side netting, while the latter's left-footed attempt was put behind for a corner by Buffon.

The equaliser
The second half could not have got off to a worse start as, after 57', the ball fell to Morata on the penalty spot and he beat Casillas with his left foot. There was more than half an hour left in which to score and force extra time, and Bale came within a whisker of doing so six minutes later. A spectacular move saw James' backheel complete a one-two with Marcelo and the Brazilian's cross found Bale, who connected with a volley inside the six-yard box but could not find the target.

From there on in, the match became an end-to-end affair. Casillas made a brilliant stop on a one-on-one with Marchisio after 70' and Bale had two opportunities in a minute, but was unable to hit the mark first with a volley and then with a header. Real Madrid gave it their all to the point of exhaustion, but it wasn't to be. 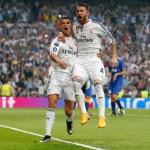