His 242 competitive goals see him currently fifth on the list of the club's all-time top scorers.
On 17 November 2006, Ferenc Puskas passed away at the age of 79. As a player he went down in the history of football, and in part established his legend while wearing the shirt of Real Madrid. During his time with the Whites, he scored 242 goals in 262 appearances, the fifth highest tally on the club's all-time list of top scorers. He also won three European Cups, one Intercontinental Cup, five La Liga titles and one Spanish Cup.

Born in Budapest (Hungary) on 1 April 1927, Puskas arrived at Real Madrid at 31 years of age - and right from the word go confirmed his status as one of the best forwards in the world. His goalscoring instinct and the power and precision of his shooting were just some of the qualities that brought huge enjoyment to the Bernabéu.

Forever etched in the memory
Among Puskas's most memorable performances is Madrid's fifth European Cup win in the final played against Eintracht Frankfurt, a game in which he scored four. He is the only player ever to have notched up a quartet of goals in a final of the competition.

What's more, a bust of Puskas installed at Ciudad Real Madrid sees the club pay a permanent tribute to him. He also enjoys significant recognition from FIFA, with world football's governing body naming its goal of the year prize the Puskas Award. 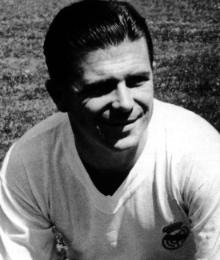