87 years of touring the Americas

Madrid first went to the Americas in 1927, under the presidency of Luis de Urquijo, and stayed for almost three months. Since then they have increased their bond with the continents and the Whites fans from there.

Real Madrid visited six countries in their first tour during 1927: Argentina, Uruguay, Peru, Cuba, Mexico and USA. In the USA they visited New York to take on a side set up by 300 Galician immigrants, Galicia SC.

In 1959, with Bernabéu as president, the side once again returned to the Americas in the summer. They touched down in Colombia, and then Ecuador. Their trip once again finished in New York. The side, with four European Cups and legends like Gento, Di Stéfano and Puskas played against Graz from Austria.

The highest scoring match of their tours: 0-9 versus Los Angeles United.

In 1961, the journey started in Chile and ended once again in the United States. There they played against Los Angeles United (0-9). The game is remembered for Di Stéfano's hat trick; the kick taken by Rita Hayworth and the recording of the game in colour by American television.

Four years later, the 'Yeyé' Madrid side faced Independiente de Avellaneda (1-1) in New York. In 1967 they went to Houston to take on West Ham at the Astrodome, in the world's first closed roof stadium. Such was the expectation that two Mexican television channels transmitted the game live. Madrid returned to the Big Apple in 1968 and downed New York General 4-1.

More than two decades later, the Whites returned. In 1990, they spent 25 days in Mexico and America. After a fantastic league campaign of 107 goals, Toshack's side, with Buyo, Gordillo and top scorer Hugo Sánchez played four games in Los Angeles, winning three matches. The members of the 'Quinta del Buitre' did not travel as they were at the World Cup in Italy.

21st Century Tours
In the first years of the 21st century, as stars such as Ronaldo, Figo, Zidane and Beckham signed, Real Madrid's reputation grew on American soil. An international prestige that would continue to grow with the arrivals of more world stars like Cristiano Ronaldo and Kaká.

20 years later, Real Madrid would return to America. In 2002 they went to New York with Roberto Carlos, Figo and Zidane. In 2005, with Ronaldo and Beckham in the squad, the squad visited Chicago and Los Angeles. A year later, they went to Utah and Seattle.

In summer of 2009, Real Madrid, with Cristiano and Kaká as new arrivals, chose Washington as their preparation base. The FedEx Field was the venue and DC United were the opponents. Madrid won 0-3. In 2010 they held a training camp in Los Angeles for the first time. There, at the Rose Bowl stadium, they played a friendly against LA Galaxy and another against América de México in San Francisco.

The side's last trip to the USA was last season. Pheonix, Los Angeles, Miami and St. Louis were the destinations. The side took part in the first edition of the International Champions Cup, which they won after victories over Galaxy, Everton and Chelsea. Later, the Whites played a friendly against Inter Milan (3-0 win) in St. Louis, completing their preparation for the 2013-14 season. 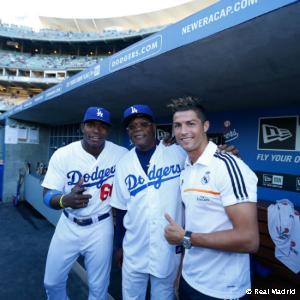