0
Real Madrid came through the match against Almería with flying colours, picking up three more points that keep them in the thick of the battle for the league title. The victory was of huge importance for two reasons: the first because of the league standings, where the Whites have leapfrogged Barcelona and are level on points with Atlético, who are yet to play their match this weekend, and the second is psychological, given that the final of the Copa del Rey against the Catalonian team is just four days away.

One player clearly stood out in the first ten minutes of the game; Di María. Three shots from the Argentinian from the edge of the box created a headache for Esteban. The crossbar kept the Whites at bay in the 4th minute, while two good stops from the keeper did likewise in the 6th and 8th. Bale took the baton from the Argentinian international and he had a wonderful opportunity when he received a backheel from Benzema and beat two men, but he failed to beat Esteban in the one-on-one in the 22nd minute.

The breakthrough came six minutes later. Di María received the ball out wide and cut inside to beat two defenders and caught the keeper off guard with a precise, curling shot. The most difficult part was over and the Argentinian, who had an inspired first half, could have even gone into the dressing room with a brace if his attempt on goal straight from a corner had not been thwarted by Esteban with a superb save. Almería, for its part, had not had a shot on goal.

Real Madrid wrapped things up in the space of three minutes
The Whites intention was to finish things off as soon as possible after the break and they did so quickly. They only needed eight minutes. Benzema and Di María combined with some one-touch passing outside the box and the Frenchman then found Bale, whose violent shot was good enough to beat Esteban.

Real Madrid was playing like a force of nature and three minutes later the third came. Isco received the ball with his back to the goal, brought it down and caught the visiting keeper off-guard with a low shot inside the front post.

Ancelotti, with one eye on the final of the Copa del Rey, then decided to give Di María, Bale and Coentrão a rest. The Whites continued to produce chances to increase their lead, most of them falling to the boots of Benzema, and Morata eventually got the fourth in the 85th minute. It was a delightful ball from Illarra and an even better finish from the academy player. It is their third league match on the trot without conceding and the Whites are now focusing on the cup final against Barcelona. 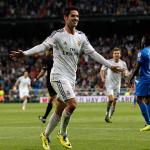