Braces from Sergio Ramos and Cristiano Ronaldo sunk Bayern in an unforgettable match that takes the team to the final.
Allianz Arena

4
This squad has long deserved to play in a Champions League final. Their time has now come, and they have got there in style: by thrashing the Competition's defending champion and knocking them out in the process. They have now played four consecutive semi-finals and their persistence has finally paid off as they are en route to Lisbon to fight it out for the Décima on the 24th of May.

The destiny of their last match on the road to the final was sealed in the space of 20 minutes that were preceded by some ominous words from Ancelotti in the press room: “Our goal is to score”. His team delivered. Only 16 minutes were needed to open their account. Modric launched in a corner and Ramos rose above the rest to beat Neuer. Bayern now needed three, but another set-piece produced the goods once more and four minutes later the visitors had practically wrapped things up. Di María took a free-kick, Pepe's glancing header found Ramos at the back post, and the defender bagged a second.


The Whites could have scored a third from a counter attack in which Neuer brilliantly stopped Cristiano Ronaldo's 27th-minute effort. However, the Portuguese was less forgiving six minutes later. Carvajal started the counter and Bale found Ronaldo, who made history by reaching the 15-goal mark in one European Cup.

With that move the Whites closed out a brilliant first half that was only tarnished by Xabi Alonso's unjust yellow card when the clock read 38, meaning he will miss the final.

An exercise in consistency and maturity
The second half was the epitome of the consistency shown by the Whites throughout the tie, in which they have not yet conceded a goal. Pepe and Ramos were exceptional and the latter received an ovation from the Whites fans who had made the trip to Munich as he came off for Varane in the 75th minute. Casillas was exceptional and the team's work rate was spectacular.

The Whites' achievement is all the more impressive when taking into account that only one team has left the Allianz Arena in the German league with a clean sheet, and it happened when Bayern had already won the Bundesliga. There was still time left for another goal and Cristiano Ronaldo was the man to get it from a free-kick after 89 minutes. The striker's crafty low shot under a jumping wall caught Neuer off-guard to finish off the goal-fest.

Real Madrid won the tie in style with a 5-0 aggregate scoreline that makes them the first European Cup finalists. Their opponent will be the winner of the Atlético - Chelsea clash on Wednesday. Now for the Décima in Lisboa! 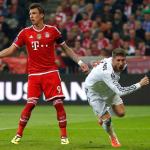