The French power forward joins from Asvel where he averaged 11 points and 4.2 rebounds in the last Euroleague.
Guerschon Yabusele (17/12/1995, Dreux, France) has joined Real Madrid for the 2021-22 season. The 25-year-old Frenchman is known for his physical strength, agility and good wrist, allowing him to play both with his back to the basket and attacking the hoop. He has NBA experience with the Boston Celtics and was one of the key players for Asvel Villeurbanne last season as they won the French League and Cup. Yabusele averaged 11 points and 4.2 rebounds in the Euroleague last season.

NBA experience
Yabusele made his debut with Chorale de Roanne in the 2013-14 season before making his breakthrough with SPO Rouen Basket two seasons later. He was picked 16th overall in the 2016 NBA draft but continued his career in China and averaged 20.9 points for the Shanghai Sharks. He went from there to the United States: playing 87 games with the Boston Celtics and 22 with the Maine Red Claws (NBDL). In 2019/20, he returned to the Chinese League, this time to the Nanjing Monkey Kings. His 17.9 points on average attracted the attention of Asvel Villeurbanne, who signed him in 2020 as he went on to win the French League and French Cup this season. 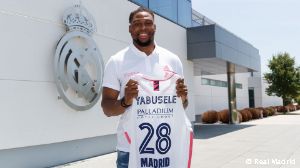