Real Madrid beat Valencia Basket in the quarter-finals and will face Lenovo Tenerife on Saturday for a place in the final. Deck and Thompkins produce sublime displays.
WiZink Center

74
Real Madrid took the first of the three steps towards its second trophy of the season. The Whites defeated Valencia Basket, who had previously won 12 straight league games. Once again, the team effort was decisive, spearheaded by the performances of Deck and Thompkins, both with 23 points and 22 PIR. The team led by Pablo Laso, who became the coach with the most games in the club's history (735), will play against Lenovo Tenerife in their eighth consecutive semi-final (Saturday, 4pm CET).

The hosts went into the game without the injured Garuba and Tavares committed his first foul just seconds into the match. In order to reserve the center, Laso replaced him with captain Felipe Reyes. On the day Reyes broke the record for the player with the most minutes in the history of the Cup, overtaking Navarro (977), he gave his team great consistency in the rebound alongside Deck and Thompkins. From this dominance, Madrid played with intensity with Alocén distributing play (5 assists), Carroll and Thompkins hitting the three-pointer with two each, and Deck from close-range. The Argentine's performance was also immense and, with 6 consecutive points (10 in the opening quarter), he spearheaded a Real Madrid side that surged in the face of adversity and dominated Valencia Basket with a great first quarter (29-17).

Madrid responds to Valencia fightback
Laso's troops played with continuity in the first minutes of the second quarter and increased the lead to 16 points at 38-22 in the 14th minute. Their defensive intensity and pressure on the outside line prevented Valencia Basket from scoring from three-pointers, one of the visitors' best offensive weapons. With total control of the game, an attempted reaction from the opposition came with a 3-11 run with Tobey and free throws doing the damage, which brought them to within 7 points (40-33, min.18). However, it was soon resolved by Real Madrid, as the hosts recovered and reversed the quarter's deficit with three-pointers from Rudy and Llull to end up winning the period and re-establish a comfortable 15-point lead before the break (49-34).

Madrid came out determined to crush the opposition after the restart. The team remained rock solid in defence, with Carroll plugging away and the hosts moving to 59-38 in the 24th minute. Valencia Basket reacted with two consecutive three-pointers from Prepelic and Van Rossom, with another 8 points, two consecutive three-pointers from ex-Madrid player Prepelic and Van Rossom, and another 8 points, they went on a 0-15 run to 59-53 in the 28th minute. Tavares ended the Whites' five-minute scoring drought at a crucial moment, giving his team an 8-point lead going into the final quarter (63-55).

Reigning champions react
There was maximum tension. Another technical foul by the Madrid bench and Valencia Basket's pressure on the scoreline put Laso's team's focus to the test (64-57, min.31). But the hosts showed their hunger to win and played more aggressively and solidly. Deck and Thompkins, the two standout performers for the Whites, produced the goods in attack to contain the Valencians. Rudy and Tavares (the center became the top blocker in the Copa del Rey with number 25), dominated in defence, thwarting Valencia’s efforts. A three-pointer from Llull and another from Thompkins sealed the victory and a place in the semi-finals (85-74, min. 40). In less than 48 hours, the Whites will fight for a place in the final against Lenovo Tenerife, who beat Hereda San Pablo Burgos 87-76 in the quarter-finals. 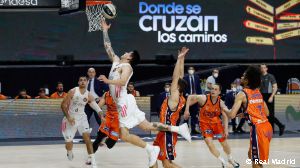 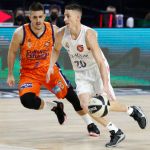