This evening sees the team play the first of three matches in six days (6:30pm).
Real Madrid faces another packed game schedule this week with three match-ups in the space of six days. The team has two road trips in the league, with this evening's contest against Coosur Betis and Sunday's match against Valencia Basket, whilst Thursday's EuroLeague game against Bayern Munich at the WiZink Center is sandwiched in between. The leaders boast an unbeaten record in the league and Pablo Laso's charges will be looking to extend a run of seven straight wins and match the club's third-best start to the competition, which came back in the 2017/18 season. The hosts will be aiming to improve on their start to the season, which has featured just one win in six matches.

Whilst the Andalusians haven't made a strong start to the campaign, their only win so far came on their floor against Valencia Basket. Meanwhile, Madrid has fared better on the road, having won all three matches (Gipuzkoa Basket, Joventut and Gran Canaria) by an average of 21.3 points. The madridistas' unbeaten start will again be put to the test against Coosur Betis.

This evening's opponents, Coosur Betis, allow more points than they score (83 compared to 77.5). However, they excel in terms of their ability to steal balls and as a team that draws a lot of personal fouls. The two teams faced off on 2 September in a friendly that ended in a 68-66 Madrid win. That match was a totally different contest to tonight's, but the leaders will have to go all out, because Curro Segura's charges are sure to give a good account of themselves. Feldeine, TJ Campbell and Harrow (Outtara is a doubt) form an outside line that's capable of posting a lot of points. On the inside, the hosts boast the versatility of Kay and the stature of Ndoye and Niang.

League's best attack
Real Madrid is performing to a high standard, both in offense and defense, in the competition. The Whites are the top scorers (90.3), with seven players averaging double digits, whilst Laso's men are amongst the teams that allow the least points (72.6). Thompkins is on fine form (12.6 points in 20 minutes across the last three matches). Laprovittola and Tavares have been the Whites' leading lights in offense in the team's perfect start to the league season. 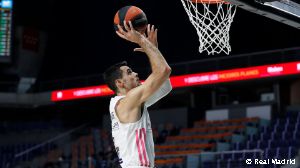