In the 1986/87 campaign, the Mexican netted an overhead kick against Betis.
This star of this week's episode of Historic Goals is Hugo Sánchez. The forward arrived at Real Madrid from Atlético de Madrid in the summer of 1985 and went on to become one of the greatest of his era. He defined an age as part of the Quinta del Buitre and became known for his first-time finishing, his acrobatic shooting and all-round eye for a goal.

In the 1986/87 season, Real Madrid visited the Benito Villamarín on match day 5, with Hugo Sánchez netting a hat-trick in a 2-6 win. This week's goal saw the forward treat the fans to yet another bicycle kick, as Míchel whipped in a corner and the Mexican ace turned it into the net to open the scoring in spectacular fashio.
Hugo Sánchez made 282 appearances for Real Madrid, scoring 208 goals. He helped the team win 1 UEFA Cup, 5 LaLiga titles, 1 Copa del Rey and 3 Spanish Super Cups. On an individual level, he won four Pichichi Trophies and one Golden Shoe as a madridista. 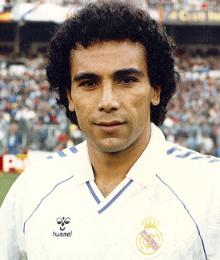