The roster, coaching staff and board of directors visited the Community of Madrid and Madrid City Council headquarters.
Discurso de Florentino Pérez en la sede de la Comunidad de Madrid
Discurso de Florentino Pérez en el Ayuntamiento de Madrid
The Real Madrid roster visited Madrid's institutions to parade the club's 35th league crown a day after having lifted the trophy at the Palau Blaugrana. The roster and coaching staff, along with club president Florentino Pérez and the board of directors set out from the Santiago Bernabéu and made their first stop at the Real Casa de Correos building, which is home to the Community of Madrid government. The Minister for the Environment and Territorial Planning and temporary president of the Community, Carlos Izquierdo, hosted the champions and offered them his congratulations. Florentino Pérez and Felipe Reyes presented the government official with a replica model of the trophy and two jerseys, dedicated to him and the Minister for Culture and Sports, Jaime de los Santos. Izquierdo, meanwhile, returned the gift by presenting the club with a commemorative plaque.

Florentino Pérez had the following to say in his address: "Here we have the Real Madrid basketball team's 35th league title. This latest title also symbolises a lot of what this team represents. This team is now eternal for all of us who love this crest and this jersey".

"However, this league crown is much more than just a league title. It offers the confirmation that in recent years we've witnessed one of the greatest eras for Real Madrid's basketball team. It's been a magical era. I want to thank the Community of Madrid for allowing us to share this latest title, which belongs to the people of Madrid and the madridistas from across the globe, here at its headquarters. Just as I always say, Real Madrid is a great ambassador of this region. We fly the flag for Madrid all around the world and are proud to do so".

Carlos Izquierdo: "You're a once-in-a-lifetime team"
"It's an honour to be welcoming Real Madrid and to open our doors to celebrate this latest league title. This one makes it 35 league titles. We're talking about an iconic and legendary team who last night became even greater after winning on Barcelona's floor. The most important thing was the lesson in self-improvement that you offered all Spaniards and the people of Madrid. You've a once-in-a-lifetime and a magical team, one to dream of and you have excited us all. In the name of all of the people of Madrid, I want to congratulate you and Florentino Pérez in particular".

The visit was rounded off with a group photo as the players kept up the tradition of taking to the balcony of the Community of Madrid building to share the title with the gathered madridistas.

Once proceedings at the Community of Madrid headquarters were concluded, the Whites expedition headed on towards the Palacio de Cibeles, the home of Madrid City Council, where mayor José Luis Martínez-Almeida was on hand to welcome them. Gifts were again exchanged here, with Florentino Pérez and Felipe Reyes presenting the officials with a replica trophy and two personalised jerseys, whilst the mayor returned the gift by presenting a commemorative plaque.

Florentino Pérez: "We're witnessing a legendary team"
"We madridistas are delighted and are proud of you. This 35th league title sums up the spirit that defines you and which you represent. Real Madrid's values have marked your destiny and have forged the strength of this team. We're witnessing a legendary team because what this set of players, led by our coach, Pablo Laso, have achieved is really special. We're going to keep working hard to ensure that we return to this City Hall every year to share more silverware with the people of Madrid".

Felipe Reyes: "Our aim is to come back here every year"
"Many thanks for your welcome. It's a pleasure to be here and it makes us proud when you say that we represent the image of Madrid. We've got an incredible and legendary team. You don't win trophies by having great professionals alone, it's also about having great people behind the scenes. Let's hope that we can come back here every year. That's our aim and we'll be going all out to come back". 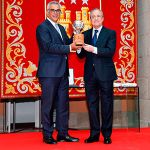