The France international has been picked as Ligue 1's best left-back for the last two seasons.
Ferland Mendy (Meulan-en-Yvelines, France, 8/6/1995) is now a Real Madrid player. The 24-year-old left-back is an international with the French team and comes in from Olympique Lyon, where his impressive performances have led to him being named in the Ligue 1 Best Eleven chosen by the Union Nationale des Footballeurs Professionnels for the second campaign in a row.

A willing runner and powerful full-back, his pace, reading of the game and vision when on the ball are his key characteristics. He is always a threat going forward and he made 44 appearances for Lyon last season. Among them came 8 Champions League encounters, while he also made his France debut in a friendly clash with Uruguay in November. He scored three times in the 2018/19 campaign.

Beginnings
Mendy came through the academy ranks at Le Havre. He went on to make his first-team debut in 2015 and in 2016/17 he was voted the best left-back in Ligue 2. That led to his arrival at Olympique Lyon in 2017, where he has gone on to become one of the breakout stars of French football. 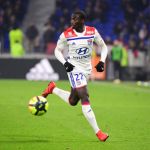