"I am happy and proud to win this prize. It is a privilege to be here", he said at the National Sports Awards .
Keylor Navas picked up the Ibero-American Community Trophy given out by the National Sports Council, at Spain's National Sports Awards
2017. The event took place at midday at the Palacio Real de El Pardo. The Costa Rican goalkeeper was handed the award by Spain’s King Felipe VI for his "contribution in helping to lead by example in sports".

Navas, alongside Emilio Butragueño, director of Institutional Relations at the club, was part of the Real Madrid side that in 2017 was part of the Real Madrid that in 2017 lifted the Champions League, Club World Cup, LaLiga and both UEFA and Spanish Super Cup trophies. “I am happy and proud to win this prize. It is a privilege to be here and enjoy such experiences. It motivates me to keep improving because I know I can".

"2017 was a great year, I loved it. We worked well, being part of a team that won titles makes me feel so proud, I look back on it fondly”.

Situation within the team
“I can see myself being at Real Madrid a long time. I'm going to work hard. Nobody knows what the future holds and life can change quickly. I try to focus on the present and my present involves Real Madrid and I will keep on giving everything I have. The day I think I’m no longer a number one, I will go home and focus on other things. The coach is the decision maker and it is up to us to work hard, push on, perform well and when the chance is there to play, give our best”.

The key to his success
“We always play with heart, play for the badge. That’s what counts. We were go out on the pitch all we want to do is win games and titles. This attitude led to big things for us. We need to keep plugging away and enjoy such moments”.

"We need to always be united as a team and fight for what we want to achieve. I know everyone believes in the talent that these players have individually as well as what we can as a team. The results are not what ideal, but we always push for more and that will not change."
Bernabéu
"We know that the fans like us to play well and win. We are aware of this and we have all the desire to do it, to sweat the shirt and be able to lift titles at the end of the season."
Cup match
"It was great. We are ready and make ourselves available to play. I Kept a clean sheet and we won at home, in a tie as important as that gives us a confidence boost to keep moving forward."
LaLiga
"There is still a long way to go. This team has what it takes to keep improving and that is what we want to do." 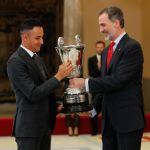