"I dedicate this award to my Real Madrid teammates and my teammates from the national team", commented the midfidler.
Luka Modric has been honoured with The Best FIFA Men’s Player 2018 at the gala ceremony held at London's Royal Festival Hall. Modric beat off competition from Cristiano Ronaldo and Mohamed Salah in the votes submitted by a panel made up of national team coaches and captains, an expert journalist representing each national team and fans from all over the world registered on FIFA.com.

Last term saw Modric lift the Champions League, the Club World Cup, the UEFA Super Cup and the Spanish Super Cup with Real Madrid, whilst he was a runner-up at the Russia World Cup, where he received the Golden Ball as the tournament's best player. What's more, in August he was recognised with the UEFA 2017/18 Player of the Year and was also named as the best midfielder in last season's European Cup.

"I want to thank my club, Real Madrid, and the fans for their affection and the support they always show me. This prize is also for you. I want to dedicate this award to my Real Madrid teammates and my teammates from the Croatian national team and my coaches: without you this wouldn't have been possible. I also want to dedicate it to my family, because without you I wouldn't be who I am today, both in terms of the person and footballer that I am. You mean everything to me".

Croatian national team
"Thank you to the fans for your support and the affection you offer every day. It means a great deal to me. I also want to thank those who voted for me and I now want to mention my idols from the Croatia team who featured at France 1998. They were my inspiration and it's thanks to them that we achieved something special in Russia. Let's hope that we see a generation that's just as good orbetter in the future. We can reach the very top with hard work and belief, that's what will see us achieve our prizes". 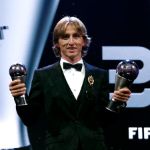