Navas, who played 11 Champions League games, beat Alisson and Buffon to claim the prize. “It's an honour to receive this award and a privilege to be part of such a special group. The defenders are hugely important in not conceding goals. We have a great relationship both on and off the pitch and this is thanks to them as well”, said the goalie.

Ramos, with 11 games and one goal, came out on top ahead of his teammates Marcelo and Varane. The Whites' captain said a few words on being presented with the award: “It's an enormous privilege and a responsibility to lead this superb group. The most important thing is that we're a team and a family. That's the key to our success and long may it continue. It's a real golden age full of players who will go down in history. We've got a wonderful team with young players and more experienced lads and it's just a perfect balance. I hope it lasts for a long time yet and that we can defend our Champions League title”.

Modric, who also notched one goal in his 11 appearances, won the accolade ahead of teammate Kroos and Kevin De Bruyne. The Croatian star said: "What we've achieved is unbelievable, we've shown our quality and that we're a real team, otherwise it would've been impossible to succeed the way we have. At Real Madrid we're going to try all we can to win four consecutive Champions League trophies, it'll be very tough but we'll try our best".

The jury for these prizes is made up of the coaches of the 32 clubs which took part in the Group Stage of the Champions League 2017/18, as well as 55 journalists who represent each of the UEFA member federations. 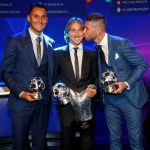