"I'm very happy, it's a fantastic moment in my career", said the Real Madrid star..
Cristiano Ronaldo is quite simply the king of football. The madridista forward has picked up the Ballon d'Or 2017, making it two in a row and a total of five in his sparkling career. France Football magazine, the publication charged with presenting the prestigious accolade, has chosen the Portuguese ace as the best player in the world for yet another year. He was presented with the prize at an illustrious gala held at the Eifel Tower in Paris, which boasted the presence of a significant Real Madrid entourage, headed by the president, Florentino Pérez. Cristiano received 946 points to get the better of Messi and Neymar in a vote by journalists from 176 countries.

Since getting his hands on the last Ballon d'Or, Cristiano has continued to lead from the front for the Whites, winning the Club World Cup, the Champions League, LaLiga, the European Super Cup and the Spanish Super Cup. Special praise should be reserved for the closing stages of last season which saw him net a dazzling 16 goals in 10 games to guide Zidane's team to La Duodécima and their 33rd LaLiga title.

Cristiano has now won the coveted trophy in 2008, 2013, 2014, 2016 and 2017, adding a fifth Ballon d'Or to his quite remarkable trophy haul. This year he has already been voted UEFA Club Footballer of the Year for the third time, and picked up his second The Best FIFA Men's Player award.

Ronaldo: “Thank you to my teammates”
“I'm very happy, it's a fantastic moment in my career. We had an incredible year, winning the Champions League and LaLiga. On a personal level, I was the top scorer in the Champions League. These collective trophies have helped me win this individual accolade, so I must thank my teammates at Real Madrid and for Portugal, and everyone else who has helped me get here”. 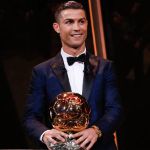