"Thanks to everyone, it has been an extraordinary year and this is a unique moment in my career", insisted the Whites' forward.
Cristiano Ronaldo has tonight been named The Best. The Real Madrid forward successfully defended his title as the best player in the world at the awards ceremony staged in London. After taking the award in its inaugual year in 2016, the Portuguese claims The Best FIFA Men's Player award for a second year running. Cristiano overcame Lionel Messi and Neymar in the voting cast by a jury consisting of national team captains, national coaches, journalists representing each national team and fans registered on FIFA.com from all over the globe.

Last season saw Cristiano capture the Champions League crown, the LaLiga title, the Club World Cup and the UEFA Super Cup, whilst he has already lifted the UEFA Super Cup and the Spanish Super Cup so far this term. In addition, between the 20 November 2016 and 2 July 2017, the period taken into consideration in the awarding of the accolade, the Portuguese forward led the Whites to the Duodécima, a 33rd LaLiga crown and the Club World Cup in Japan.

Cristiano: "Thanks to everyone who voted for me"
"Firstly, I want to thank my teammates and my club, Real Madrid. Thanks to everyone. It has been an extraordinary year. I've made this podium in each of the past 11 years, which requires a lot of work and dedication. Never did I think that I'd win so many pieces of silverware in my career. I would also like to acknowledge the work put in by my family, who are here tonight, my brothers and sisters, my friends, my girlfriend, my mum, who is at home right now and also to my children, who are at home".

"This is a unique moment in my career and I'm very happy. Thanks to everyone who voted for me. I also want to congratulate Leo and Neymar on making it here tonight. Thanks also to the fans, my coach, my teammates and the club's president for their support day in, day out. We're here in London for the first time and this second The Best award represents an unforgettable moment for me. I know that the supporters voted and I want to give my thanks to those who voted for me from across the globe. It's an honour to be here and be surrounded by so many stars. I'm thrilled, many thanks".

Camaraderie
"Winning this award is a really great source of pride. I want to dedicate it to the fans, my teammates and all of those who have helped me to be here. I'm very happy and want to enjoy the moment. We had a fantastic season and I want to congratulate my teammates, both those who are here and those that are back in Madrid. It was an unforgettable year. There's a lot that goes into this, training out on the pitches, in the gym, ice baths, eating healthy, sleeping properly...."

Pride
"I work hard to win team prizes to then aspire to individual awards, I like winning both. I feel lucky to be playing at the best club in the world and for a top national team. I'm very proud to be at Real Madrid, achieving things all together and making people happy. I can't ask for any more. I enjoy football and it's what really drives me on. I don't compete with Leo. I'm happy and feel relaxed. We'll see what happens in the future, but we've got to enjoy the moment". 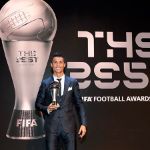