Carvajal's 119th-minute strike decided a thrilling game, after Ramos had forced extra time with a goal on 93 minutes. Asensio netted the Whites' first of the night with a sublime strike.
Lerkendal Stadion

2
Real Madrid have been crowned champions of the European Super Cup for the third time in the club's history. There's not a more reliable side out there than the Whites when it comes to winning one-off games, with Real Madrid having won the last six finals they have made. On this occasion the Whites prevailed despite being without Cristiano Ronaldo, Pepe, Toni Kroos, Gareth Bale and Keylor Navas. The characteristic ambition and spirit to fight until the death, qualities which define the madridistas, were once again key in overcoming Sevilla in this most pulsating of encounters.

Marco Asensio put the Whites ahead half way through the first half. The midfielder, who had already forced Sergio Rico into action with a 9th-minute strike, broke the deadlock with a sumptuous effort. The youth-team product picked the ball up on the edge of the area, got his head up and let fly with a bullet strike from over 30 metres which flew into the top left-hand corner of the net, as the European champions drew first blood courtesy of a fantastic goal.

Sevilla level things
Sevilla reacted to going behind and on 30 minutes Daniel Carriço fired in a warning shot, with his effort from the edge of the box requiring Kiko Casilla to be at his best. On the stroke of half-time Sevilla restored partity when Franco Vázquez pounced on a loose ball inside the area to guide the ball into the far corner of the net. There were still another 45 minutes to come and it was time to go again.

There was a better flow to the game in the second period. The first chance of the half came on 55 minutes and it went to the way of Real Madrid. Asensio laid the ball back to Isco, who managed to work himself a yard and get a shot away, despite the close attentions of three Sevilla defenders, but his strike flew inches wide of the upright. Karim Benzema replaced Álvaro Morata on 62 minutes and just two minutes later Real Madrid once again poured forward in search of a goal. Asensio swung in a corner and Rico had to be in top form to gather the ball in from a Sergio Ramos header.

Ramos: the 93rd minute
The whole complexion of the game changed on 72 minutes. Vitolo fell in the area after a clash with Ramos and the referee awarded a harsh penalty. Yevhen Konoplyanka stepped up to convert the spot-kick and hand Sevilla the lead. Real Madrid would have to come from behind and they laid siege to the Sevilla goal in the final 10 minutes. Carvajal came close to scoring on 81 minutes but his cross-shot was parried behind for a corner by Rico. The equaliser came in what has become a legendary minute for Real Madrid supporters: the 93rd. The man of the moment was the same player who popped up in the same minute of the Décima final: Sergio Ramos. Lucas Vázquez sent in a cross to the far post for the captain to nod home. Real Madrid once again evidenced their untameable fighting spirit to prove that they can never be ruled out

Goal wrongly disallowed
Real Madrid came out all guns blazing in extra time and things turned further in their favour following the sending off of Timothée Kolodziejczak on 93 minutes for a second yellow. Sergio Ramos powered home a header, but his effort was chalked off for a non-existent foul by the Real Madrid captain on Adil Rami. The Whites weren't having much luck with the refeering decisions.

Carvajal decides it
The European champions' superiority was emphatic and next up it was Lucas Vázquez who came close to scoring on 111 minutes. The academy product collected an exquisite pass from James with a fine piece of control, but Sergio Rico was equal to the effort to deny a certain goal. Just four minutes later, James had an equally clear-cut chance. On this occasion, Lucas Vázquez - who put in an excellent performance - crossed and James unleashed a volley, only for the Sevilla custodian to save.

However, Rico was helpless to deny Carvajal's effort on 119 minutes. The defender's goal was one that'll long remain in the memory. Drawing on every last ounce of energy, he embarked on a mazy run which took him past several defenders, before producing a perfect finish with the outside of his right boot to make it 3-2 and ensure that Real Madrid are once again crowned European Super Cup champions. 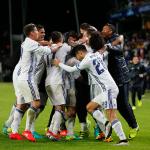