Goals from Ramos, Benzema, Bale and Isco seal the thrashing against Cruz Azul and the 21st consecutive victory in a match where Casillas made another penalty save.
Le Grand Stade de Marrakech

0
4
Real Madrid are through to the final of the Club World Cup. Only one match separates the team from the possibility of adding a new piece of silverware to their trophy cabinet. Today's match on the pitch of the Grand Stade de Marrakech gave further evidence that this Real Madrid side can be dependable whatever the objective they want to achieve. The Moroccan city now joins Sofia, Liverpool, Basel and other Spanish cities as another destination conquered by Madrid during their "personal best" record of 21 consecutive wins.

The key element was taking the lead early on, just after the fifteen minute mark, against a Cruz Azul side who clearly intended to allow Madrid time on the ball before waiting for a chance to counter-attack. Ancelotti's tactical laboratory was successful once again, although the match's first goal could have come in the 11' if Benzema had not hit the post with a shot from the edge of the area. Kroos took the corner, and Ramos as he has already done in Munich or in the final of La Décima, gave more evidence of how he is one of the world's best aerial players.

Incredible move by Carvajal
Ramos once again had an important role in a semi-final. If his goal turned the game in Madrid's favour, they gained another advantage in the 36'. The goal came from Benzema who scored with delight from the penalty spot but Carvajal was deserved a lot of the praise large. The reserve player created a spectacular move, he got away from three opponents before providing the French player with a measured assist.

It was important to go into the half-time break with the deserved advantage. However, in the 40', Pavone fell inside the area in a struggle with Ramos and Osses pointed to the penalty spot. Torrado stepped up and the Real Madrid captain made a penalty save for the second match in a row. Just as the Whites still had not yet recovered from the scare, a mislaid pass from Illarra allowed Pavone to go through one-on-one with the Madrid keeper who came to the rescue once again.

The decisive goal
Real Madrid reacted after the break and did not take long to demonstrate that they had come to Morocco to become world champions. They only needed five minutes. Benzema controlled the ball with his back to goal, gave the ball out to Cristiano Ronaldo and Bale, who was at the back post, headed the ball into the net following a left-footed cross from the Portuguese star.

The match was decided and from that moment onwards it was basically all about having a good time. In the 62', a stunning counter-attack almost ended in the goal it deserved. Benzema saw that Bale was unmarked and the Welshman's cross was met with a spectacularly resourceful rabona from Ronaldo as he ran onto the ball.

Isco added the finishing touch
The Madrid side were having a good time and were entertaining the 34,862 spectators in the stands. Isco added the finishing touch when he scored the fourth goal in the 76' with a lovely piece of play where he got away from two defenders by cutting back inside. Khedira could have scored the fifth in the 83', but his header hit the post. Real Madrid now awaiting their opponent who will be the winner from the other semi-final between San Lorenzo and Auckland City. 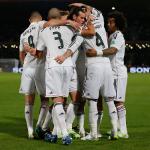