The league leaders recorded their 18th win away from the WiZink Center and finish the Regular League season unbeaten on their travels. They will face Herbalife Gran Canaria in the quarter-finals.
Palacio de Deportes José María Martín Carpena

90
96
At the Martín Carpena arena, Real Madrid once again wrote its name in the history books by producing the best Regular League season in the history of the competition after becoming the only team to win all its matches on the road (18). Today, the team was spearheaded by Laprovittola (11 points, 8 assists and 20 in PIR), Carroll (22 and 19) and Poirier (11, 9 rebounds and a career-high 23). In addition, Pablo Laso's troops set a new winning record in this phase with 34 victories and the best winning percentage with 94.4%. The side will now take on Herbalife Gran Canaria in the quarter-finals.

The league leaders were on the front foot from the tip off, producing a sublime opening 7-minute display, with three 3-pointers giving Unicaja a taste of what was to come and Carroll taking centre stage. The shooting guard was unstoppable, scoring 13 points without missing. Laprovittola also played his part, with another two 3-pointers, five out of five for his side, to put the away side 20-8 ahead. The introduction of Jaime Fernández and Abromaitis rallied the hosts, who managed to reduce the deficit to five points, but a sixth three-point play by Madrid from Tristan as the buzzer sounded brought the first quarter to a close with the score at 17-25.

Madrid sets the pace
The Whites were rock solid, clearly dominated the rebounding and controlled the play. Tyus, Causeur and Abalde countered Unicaja's attempts to get back into the game and opened up a cushion of 15 points at 24-39 at the midway point of the second quarter. The league leaders pinned back Katsikaris’s charges, who were fighting to make the playoffs. But two consecutive technical fouls by Rudy, which led to his expulsion, gave the hosts some encouragement and they took advantage to go on a 15-3 run that brought them to within three points, then reduced to six at the end of the first half after a 3-pointer by Alocén (39-45).

The pattern of play remained the same after the re-start, with Real Madrid once again responding well to every attack from the hosts, showing great team strength and focus. With Poirier sidelined after an accidental elbow by Guerrero, the likes of Taylor, Tyus, Carroll and an on-form Laprovittola stepped up to the fore. The latter showed clarity in attack, driving the team to perfection, scoring and assisting his teammates (6 assists in the third quarter), which allowed the visitors to maintain a lead that never fell below seven points (62-71, min. 30).

Victory was hard fought right to the end
Real Madrid was determined to keep writing its name in the history books in this Regular League season and stayed focussed right until the final buzzer. Unicaja gave it everything and took the game all the way. The hosts even managed to draw level at 88-88, but Madrid once again responded superbly. Causeur made it 88-91 with 26 seconds left on the clock, then one free throw at either end made it 90-92 with the hosts in possession and 16 seconds remaining.  But Taylor’s fine defensive work on Brizuela and two free throws by Garuba sealed Madrid’s 18th win on the road. The Whites bring to an end an impeccable away run in the Regular Season and can now focus on the playoffs, with Herbalife Gran Canaria first up from 31 May. 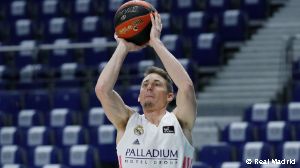