Modrić heads the team in front in the first half, but the hosts equalise from the penalty spot in the 51st minute.
Martínez Valero

1
Real Madrid were held to a draw by Elche and were unable to end 2020 by claiming a seventh consecutive victory. Luka Modrić gave Zinedine Zidane's side the lead in the first half, but the hosts equalised from the penalty spot in the second half. The first opening for the madridistas came in the 3rd minute when Lucas Vázquez picked out Toni Kroos, but the German headed agonisingly wide from the back post. Seven minutes later, Elche had a low effort by Rigoni saved by the outstretched Thibaut Courtois.

Madrid began to apply the pressure on the hosts' defence and on 13’ came close to taking the lead. Casemiro flicked the ball on to the onrushing Marcelo who hit a sweet half-volley with his right foot from the edge of the box onto the underside of the crossbar. But seven minutes later the breakthrough came when Marcos Asensio's powerful swerving drive was tipped onto the crossbar by Badía and Modrić reacted quickest to head home the rebound to send the Whites 1-0 up at the break.

Elche restore parity
This contest became an uphill struggle after the restart as Elche drew themselves level in the 51st minute, when Fidel slotted home from the spot following Dani Carvajal’s tussle with Antonio Barragán. Some 12 minutes later, the hosts even had the chance to take the lead when Lucas Boyé’s effort on the half-turn crashed against the woodwork. That let-off spurred Madrid into life as the team went on to carve out two chances to restore the lead. With 70 minutes on the clock, Toni Kroos switched the play excellently to find Carvajal, who brought the ball under his spell on the edge of the box, before cutting inside Sánchez Miño and unleashing a left-footed effort, which drew a superb save from Badía, who palmed the ball away to keep the scores level.

Chances
Just a minute later, Carvajal turned supplier as his cross lingered invitingly in the six-yard box following a series of ricochets. Sergio Ramos pounced but the inspired Badía once again showcased his reflexes. Zidane turned to Eden Hazard and Fede Valverde in the 77th minute as the duo entered the fray in place of Lucas Vázquez and Kroos. The visitors laid siege on the Elche goal in search of a winner and it very nearly materialised with a minute of normal time remaining. Modric’s cross picked out Benzema, whose glancing header from inside the six-yard box came just a whisker away to securing victory. Real Madrid’s attentions now turn to the side’s next LaLiga game, which is against Celta on Saturday (9pm CET). 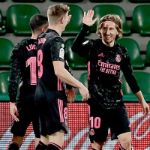