The forward is one of the brightest young talents in European basketball and averaged 14.8 points in the ACB Final Phase.
Alberto Abalde (15/12/1995, Ferrol, La Coruña) will boast Real Madrid's outside game for the next five season. The 24-year-old Spanish international is one of the brightest young things on the European basketball scene and checks in at the club fresh from having been the fourth top performing player in the ACB Final Phase, having posted 14.3 points and a PIR of 17.8.

Abalde, a forward who measures in at 2.02 m, combines physical power, which sees him excel in defense and on rebounds, with natural offensive talent. He's very good in and around the basket, is a threat on one-on-ones and has a good shot from the outside, as evidence by the 42.5% shooting success rate he recorded in the league this term.

Excellent form
Abalde was reared in the Joventut academy and went on to make his first-team debut in the 2013/14 season at the age of 18. In his final year at the club, he averaged 10 points in 23.8 minutes and was named in the League's Best Young Quintet. He joined Valencia Basket in the 2017/18 campaign and was an increasingly important member of the team before establishing himself as one of the side'sleading lights.

The new madridista signing, who made his bow for the senior national team in 2018, averaged 8.7 points, 3.3 rebounds, 1.5 assists and a PIR of 10.9 last season, which he capped off with a fine individual showing in the league's Final Phase, where he was the second top-performing outside player, behind Campazzo, thanks to his 14.8 points, 2.8 rebounds, 3.8 assists and PIR of 17.8. 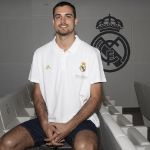