Sergio Ramos' goal from the spot gave a solid Real Madrid another three points, as they recorded a fourth clean sheet.
San Mamés

0
1
Real Madrid continue to look remarkably solid as they keep up their relentless march towards the LaLiga title. It seemed a tough ask to win all 11 remaining games in the league following the restart, but Zidane's men have the bit between their teeth and look capable of doing just that. At San Mamés, one of the toughest grounds in LaLiga, the leaders picked up a seventh win in a row when Sergio Ramos converted a penalty given for a foul on Marcelo.

The first half finished goalless, but not for lack of trying. The visiting side had three fine opportunities, all involving the lively Asensio. First up, his long-range free-kick was stopped by Unai Simón, before he delivered two sweet crosses from the left, which first Rodrygo, then Benzema were unable to turn into goals despite two powerful headed efforts. Athletic also forced Courtois into a good save from a Raúl García effort on 17’.

The script of the match didn't change after the break. There was nothing between the two sides and very little action in either penalty areas until Dani Garcia brought down Marcelo inside the box with 70 minutes gone. The VAR referee called González González over, and after going to the monitor to check the incident, he pointed to the penalty spot, to the delight of Sergio Ramos, who stepped up and converted. The captain was on the mark again from 12 yards out and has now scored 20 penalties in a row without missing.

Fourth consecutive clean sheet
From the moment the goal was scored until the full-time whistle, Real Madrid showed why they have conceded the fewest goals in LaLiga, restricting Athletic to almost no chances. They even had the opportunity to double the lead in the 88th minute after great link-up play between Benzema and Kroos, but the home goalkeeper came out on top in a one-on-one with the Frenchman. It was the fourth consecutive match without conceding a goal for the league leaders, who have only conceded twice in the seven matches played since the competition's restart. There are now just four finals left to play. 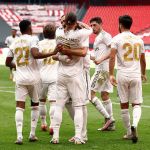